Rainmakers are selected based on their sales accomplishments earning them a spot among the top 20% of Liz Moore & Associates top performers.

In additional to sales volume standards, Rainmakers share client-centric philosophies, a dedication to being masters of their craft, and a commitment to giving back to the community they serve. 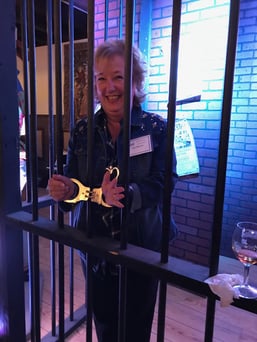 Dream Catchers is a 501 (c)(3) non-profit organization whose mission is to provide life-changing equine assisted activities and therapies to children and adults with special needs.  Each year, the Center provides over 4,000 lessons to about 500 students from 4 years of age to senior citizens in their 90’s.

Thank you to all who donated to this amazing cause! 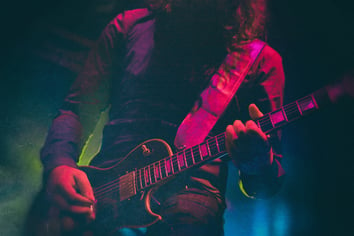 If you are like many music loving locals, you spent a lot of time at the Boathouse in Norfolk and were the first to see many bands before they "made it big".  The Boathouse canceled shows in 2003 after damage from Hurricane Isabel, later forcing them to close for good, and the warehouse-like music venue has been missed ever since.

Now, Sean Pepe — one of the people behind Hampton restaurants Barking Dog and El Diablo and Newport News’ Kismet Bistro — will pay homage to the Norfolk icon by opening a venue called Boathouse Live at City Center, Mayor McKinley Price announced Tuesday during his State of the City address.

The venue would be filling a space that has been vacant since 2015, when it was last occupied by Toby Keith’s I Love This Bar and Grill. It would also fill one of several vacancies on Mariners Row in City Center.

Price described the future venue as “a dynamic atmosphere for artists and audiences alike.”

The venue should be done by the end of November, and a band called The Jauntee is scheduled to play there on Dec. 1. Hailing from Boston, the band’s website describes its sound as “Funk/Rock/Jazz/Progressive/Bluegrass/Psychedelic and Ambient.”

One thing is for sure, this is big news for the Virginia Peninsula!

How Did Newport News, Virginia Get Its Name?

Do you know how Newport News got its name?

Steeped in history, ours is a community of diverse trades including shipbuilding, technological research and international commerce. We are proud of our city and its rich heritage which dates back to the founding of America.

Newport News was named for Christopher Newport, captain of the Susan Constant, the lead ship of the three ship fleet that carried the Jamestown settlers to the new world in 1607. Captain Newport made several more trips between the new world and England. After the Starving Time of 1610, the original colonists abandoned Jamestown and encountered Captain Newport in the James River and learned that reinforcements of men and supplies had arrived, thus prompting their return to Jamestown. The place where that occurred became known for Newport’s good news, ‘Newport’s News,’ and eventually just Newport News.

Since the turn of the 19th century, Newport News has been known as the provider of the nation’s finest, technologically advanced military ships. In more recent years, Newport News has also become a center for international commerce, research and technology. Our economy is strengthened by a strong military presence in Hampton Roads and, in Newport News, we are proud to be home of the U.S. Army Transportation Center at Fort Eustis. The City’s historic sites, museums and cultural facilities compliment the quality of life for Newport News residents and businesses. The City boasts 18 public parks, as well as public boat ramps and recreation facilities.

Interested in finding more things to do in Newport News and around the Historic Triangle? Subscribe here to our blog as we post ideas frequently.  You also can purchase a copy of Liz’s recently published book, 101 Reasons to Love Living in the Historic Triangle, in either paperback or e-book version by clicking the button below.

All are situated in the context of natural beauty and ample amenities: four miles of walking trail, an 18-hole golf course with pro shop, restaurant/grill, conference rooms, a hotel, saltwater swimming pool, tennis courts, a

clubhouse, recreation center, and fitness center. On the York County side of the neighborhood, there are more tennis courts, a community pool, and an adjacent public park. The neighborhood is meticulously maintained.

Newport News One City Marathon Is a Go This Blustery Weekend 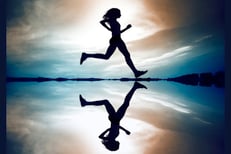 After several days of uncertainty because of potential snow in the weather forecast, Newport News One City Marathon officials announced on Friday morning that the event will go on as planned.

The marathon and marathon relay start at 7 a.m. at Newport News Park and ends at Victory Arch at 25th Street and West Avenue in downtown Newport News.

The One City One Celebration event takes place from 8 a.m. to 2 p.m. on Sunday in Victory Landing Park, adjacent to the arch.

Extra precautions are being added to deal with the cold weather and related hypothermia concerns including:

One City Marathon...just another reason why we love where we live! 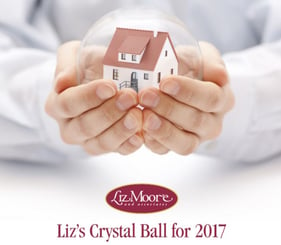 2016 was a solid year for local real estate. Here on the Peninsula, closed sales finished up
9.5% for the year, with pending sales up just under 10% in December, which is activity higher
than we typically see during the holidays. The New Year has started off with a bang, which I
believe is indicative of another strong year for our market.

We are entering 2017 with only slightly over 5 months of active inventory, and homes selling,
on average, in only 97 days. That is good news for sellers who are priced properly and in good
condition. The exception here is the luxury market, where sellers need to be significantly
more patient – there is currently 10 months of inventory priced at $750,000 and up.
Prices remained remarkably steady during the past 12 months, with the median sales price on
the Peninsula hovering right around $180,000 for most of the year.

Here is what I see in the coming 12 months:

Consumer confidence has been our biggest challenge in recent years, especially
during the contentious presidential election. With that behind us, activity levels have
definitely regained momentum.

My expectation is that there are many sellers who have been waiting for more favorable
market conditions to list – and that should begin to happen as we move toward Spring.
We saw a 30% jump in new listings in December, signaling that wise sellers recognize the
importance of beating the competition to the Spring market.

As prices begin an inevitable rise, consumers will realize that moves need to be made ASAP
in order to take advantage of a 7 year streak of historically low rates and home values. It’s
important to note that the market can shift quickly, and the pendulum is likely to continue its
swing toward lower inventory levels, creating a more competitive environment than we’ve seen
in recent years.

Interest rates will begin a slow and steady climb this year.
Interest rates began their inevitable ascent in the final quarter of 2016, and we are expecting at least 2 more increases in 2017, according to our friends in the mortgage industry. The good news is that this is a sure sign of a strengthening economy, but the bad news is that each hike raises the bar on home affordability. My prediction is that this will add some urgency to the market this year, particularly in the lower price ranges.

We recently got some great news for home buyers as FHA lowered mortgage insurance premiums, and Fannie Mae and Freddie Mac are now offering low down payment mortgage products (3%) in order to compete with their government counterparts. That, combined with underwriting restrictions which are finally beginning to ease, should encourage first time buyer activity that has been priced out of the market.

Prices will finally begin to show improvement in many neighborhoods.
Prices are neighborhood specific, and some areas are definitely improving faster than others. I expect the market to continue to trend toward more normal appreciation rates in 2017 and beyond.

My overall message here remains the same as last year: If a home purchase is on your New Year resolution list, buy early in the year, as interest rates have a much greater impact than most realize. For instance, waiting for prices to drop 5% to save $12,500 on a $250,000 purchase may cost you an extra $225 per month in payments; if rates increase from 4% to 5.5%, then your payment increases from $1194 to $1419. For most buyers, the affordability index of monthly payments is a more critical consideration.

Your support and referrals are much appreciated, and we promise to deliver the extraordinary client experience that has become our hallmark!

If you’re a seller who has been wondering if it might finally be time to sell, email us at concierge@lizmoore.com, or click below, and we can prepare a complimentary analysis of market value for you – you just may be pleasantly surprised.

Are You Looking for a Home in Newport News?

We are excited to bring you the latest issue of the Liz Moore Newport News Homes Magazine! Click the image below to flip through the magazine featuring our newest Newport News homes for sale. 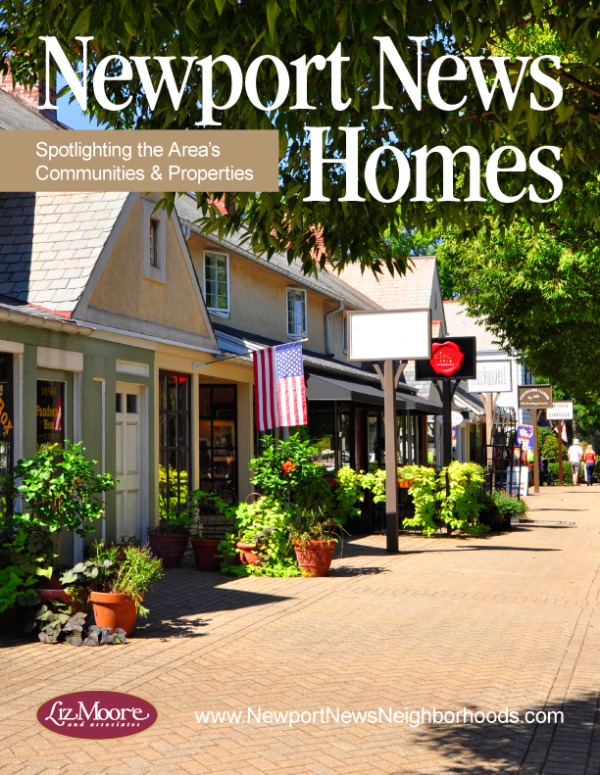 Check out the rest of our digital magazines - Hampton Homes, Williamsburg Homes, Waterfront Property, and more!  You can subscribe to one or more of our magazines, and they will be delivered FREE to your inbox once a month, dynamically uploading the latest issues. 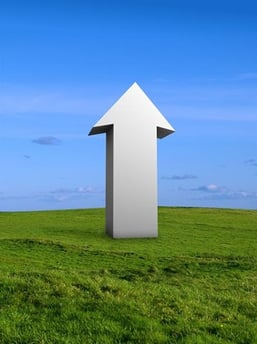 The U.S. Census Bureau released its population estimates from April 2015 - July 2015 for much of Virginia, including many of our local cities and counties.

Williamsburg shows to be the fastest-growing community in Hampton Roads, according to the Census estimates, with an estimated 10.1% increase in residents to 15,052.  The state's average growth rate is 4.8%.

Virginia added added more than 381,000 people to its state between 2010 and 2015 - bringing the overall population estimate to around 8.3 million, which makes it the 12th largest state in the union.

If you’re a seller who has been wondering if it might finally be time to sell your home in Williamsburg or on the Peninsula, email us at concierge@lizmoore.com, or click below, and we can prepare a complimentary analysis of market value for you – you just may be pleasantly surprised.

The Liz Moore Summer Open House Extravaganza is Back!

Calling all house hunters!  Visit a Liz Moore open house between May 14th and September 15th, 2016 and you'll be entered into a drawing to win some amazing prizes.

House hunters can register for the drawing at every Liz Moore open house.  The more you visit, the better your chances are of winning!
Click below for a list of open houses and to view complete contest rules.

Previous All posts Next