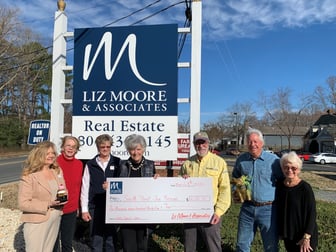 Dan Benjamin of Smith Point Sea Rescue accepted a check from the Liz Moore Kilmarnock office for the money they raised at the 2022 Cupcake Wars fundraiser.

The Kilmarnock office was also awarded Peter the Pig, an LMA mascot, for raising more money than another other office this year.