Meet Your Neighbors in Westport at Ford's Colony

Many of you have asked who is building in Fords Colony’s newest community, Westport. 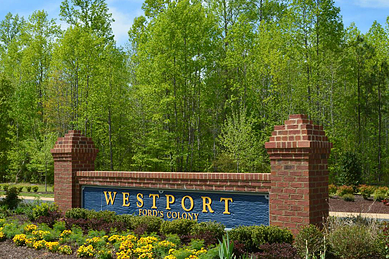 Westport is the newest neighborhood in Ford's Colony, Williamsburg's premier recreational community. The opportunity for the luxury home buyer to purchase an estate lot in a premium community is unlike any other in the Williamsburg area. Offering home sites ranging from 3 to 5 acres, Westport provides a unique level of privacy in a master-planned community and also convenient access to all of the attractions, shopping, and dining of Williamsburg.

We’d like to introduce you to the Weslowskis, who will be moving in within a few months.  Look for more Westport Neighbor profiles in the coming weeks, as sales have been brisk so far this Spring!  And, if you missed the recent Wine Tasting, be sure to stop in to see us at 3420 Westport on weekend afternoons – the model is now finished, furnished, and looking great!

Spring is here, and the buyers are springing into action in Westport at Fords Colony.  In the last 30 days, lots 28 and 38 are under contract, as is a pre-sold home with Stonehill Company on lot 6.  There are 13 total sales so far in Westport, including one home already under construction on lot 11 with Blackrock Builders.  Stop by and visit the newly finished and furnished model home at 3420 Westport – we’re open Saturdays and Sundays from 1-4.  Or, learn more at westportatfordscolony.com.

What’s Happening in the Lot Market in Ford's Colony?

Over the past 15 years, we’ve seen some dramatic activity in the lot market here in Ford’s Colony.  Sales skyrocketed in 2003 and 2004, and the data shown below actually underestimates the activity level since a significant number of lots were sold directly to buyers from the developer.  Developer direct sales were not captured by the Williamsburg MLS which is the source of these statistics. 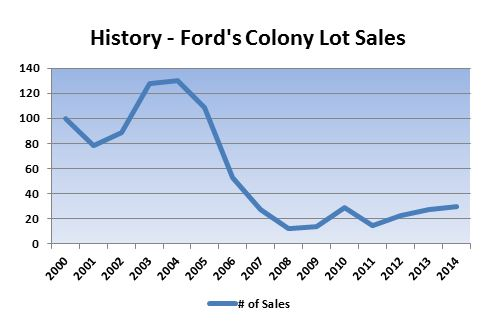 You might call the peak a buyer frenzy.  Buyers were confident, due diligence was lacking, and just about every lot that was listed for sale actually sold… and in a short amount of time.  Most of these buyers are now enjoying Ford’s Colony life in their custom built homes.  Some, however, have been trying to sell their lots and have fallen victim to a sharp market decline.  Most of the successful sellers have taken significant losses as we have seen lot prices fall by nearly 50% from the peak.

Currently, there are 140 lots listed for sale.  Many of these have been on the market for years.  What’s behind the sellers’ motivation?  Most have had a change in circumstance which has derailed their plans to move to Williamsburg… health issues, loss of a spouse, desire to live closer to the grandchildren, etc.    Some have taken advantage of bargain prices on the resale market.  Some discovered that they could no longer afford to build the home they had planned to build.  Others found that the home they had planned would not actually fit on the lot they purchased.

Since construction in Ford’s Colony is scattered over the entire neighborhood, it’s hard to tell how many undeveloped lots are remaining.  Most people will be surprised to hear that we still have about 500 lots that have not been developed.  Buyers who are looking to build in Ford’s Colony can find plenty of options whether they are looking to downsize in St. Andrews Village, build a beautiful golf view home, or experience the ultimate privacy offered by the estate lots in Westport.

Where is the lot market heading now?  Well, we’ve historically seen a correlation between the lot market and builder activity.  Builder activity was nearly non-existent between 2007 and 2012.  We are now seeing an increase in both custom home construction and builder spec homes.  The long time Ford’s Colony builders are very busy.  Also, there’s a new level of excitement created by Wayne Harbin and the Southern Living Showcase Home and by several new builders who are now building new home construction in Ford’s Colony… specifically, Westmoreland, Stonehill, and Stephen Alexander.  Don’t be surprised if we start to see noticeable improvement in the lot market over the next couple of years.

Have you been thinking about purchasing a lot in Ford's Colony, or do you have a lot that you'd like to sell?  Contact Susan at 757-784-0363 or golfproperties@cox.net.

If you’re thinking about a brand new home, we can help you imagine the possibilities!  We’ve gathered everything you need to know before starting your new homes search – all in one place at LizMooreNewHomes.com!  You’ll find information about new homes communities in Williamsburg and on the Virginia Peninsula – from River’s Bend at Uncles Neck to Westport to the Oaks at Fenton Mill – and everything in between!  You can search new homes for sale in Williamsburg, Yorktown, Newport News, Hampton and surrounding areas, and learn about new home and model open houses that will be open for touring in the coming weeks.  Browse floor plans and elevations in our custom floor plan gallery, and learn about local new home builders with their online profiles.  Read articles about building a new home, and be sure to check out Liz’s Pick of the Week, where Liz Moore will post reviews of the latest trends and products in homebuilding.

Have you ever thought about buying a brand new home?

Tell us a little bit about your dream home, and we’ll arrange for a complimentary consultation with a new homes expert who can point you in the right direction!